On Day 5, our goal was to learn more about the local history of New Orleans. We started the day at the Historic New Orleans Collection, a small museum in the old French Quarter. Unfortunately, much of the museum was unavailable to us due to underway construction. We did, however, take our fill of a couple of rooms with displays and historic portraits.

There was also a beautiful courtyard. I wish we had these in the midwest!

For Paul’s coffee fix, we visited Antoine’s Annex — an extension of Antoine’s Restaurant we had sighted the day before.

Next, we visited the Beauregard-Keyes house for a tour. The house, built in 1826, has an interesting and varied history.

Chessplayer Paul Morphy (world champion during the 1850s) lived here for a time, as did General Pierre Gustav Toutant Beauregard. It was later owned by the Italian Giacona family, who operated a business from the house and converted the basement into a wine cellar.

An interesting event in the story of the Giacona family involves their receiving threatening letters from a band of local extortionists, demanding money and claiming to be part of the ‘Black Hand’ — an early iteration of what is known today as the mafia. In 1908, Pietro Giacona allowed four of the men over for dinner. By 2:00am, the situation escalated when the men, who had reportedly drank a generous amount of wine, refused to leave. The Giacona men pulled out guns and shot the four men. Three of them died immediately. The fourth fled and was later found and brought to the hospital by the police. Initially, the Giaconas were charged for their actions, but the case was dismissed in 1910 on grounds of self-defense. Many well-known local Italians voiced their support for the Giaconas’ actions.

The next owner slated the house, which had fallen into disrepair, for demolition in 1925 with plans to build a factory on the site. A group of local women intervened and, with the help of General Allison Owen, the house was saved with intentions to establish a memorial for General Beauregard. The newly-formed Beauregard House Inc. never succeeded in establishing the memorial due to finances. Instead, the house was used over the years as a meeting place, homeless shelter, and rest stop for soldiers during WWII.

In 1944, author Frances Parkinson Keyes, needing temporary lodging while researching the area for a novel, rented the second floor of the house. She paid rent by restoring the house to its former glory, hiring an architect to help. She eventually bought the house and made it her primary residence.

Mrs. Keyes (pronounced “kize”) authored several novels that were best-sellers during the 40s, some of which were set in New Orleans.

She was very successful, and loved to travel and host parties.

This was her square grand piano, which was brought from New England.

Our tour guide allowed me to play it! I was surprised that the piano was as well in tune as it was. Most square pianos, due to age and construction, tend to no longer hold a tuning. This appeared to be a well-made instrument.

The back of the house overlooks a courtyard and several outbuildings. In Mrs. Keyes’ later years, she remodeled and moved into the one-story building you see here on the right side of the photo.

This space became her primary dwelling place through to the end of her life. Pictured here are examples of the beautiful furniture she purchased during travels to exotic places.

This was her writing desk. Mrs. Keyes was disciplined about her daily writing habit.

She wrote not only over fifty books (a collection of them pictured below) but also hundreds of articles for magazines such as Good Housekeeping.

Before she passed in 1970, Mrs. Keyes established the Keyes Foundation to preserve the house and its history. Seeing and learning about the house was so much fun. I would like to find time to read one of her books!

After the tour of the Beauregard-Keyes house we ate lunch at The Gumbo Shop, reportedly one of the best places in the old French Quarter to find local cuisine.

Next, our plan was to attend a concert at Preservation Hall, a historical venue dedicated to preserving the traditional New Orleans jazz style. Concerts are offered on the hour in the evenings, with tickets acquired through waiting in a line beforehand. We got in line around 4:30pm hoping to catch the 5pm show, but had to wait instead until the 6pm!

In the photo below, notice the sign for Preservation Hall constructed by attaching lettering to an old trombone case. 🙂

We weren’t permitted to take photos during the show, but were allowed to beforehand. As you can see, they’ve not only preserved New Orleans’ original jazz style, but also the hall itself. 😉 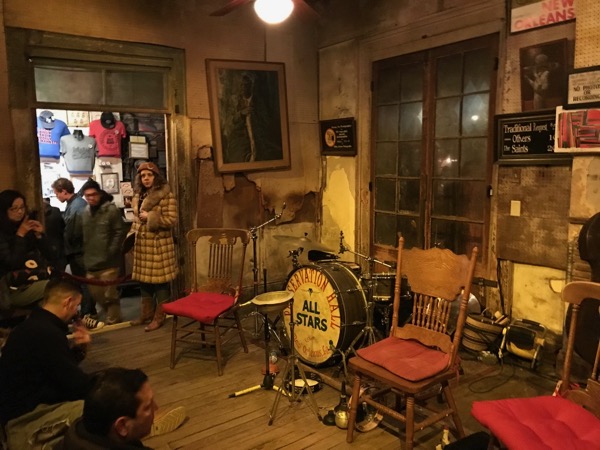 The music was phenomenal. Absolutely phenomenal. We had a blast, well worth the long wait in line. After the show, I had a photo taken with the trumpet player.

In the gift shop, I purchased a CD of a recently re-released 1964 recording of the original Preservation Hall band, which at the time was led by a black pianist by the name of “Sweet Emma” Barrett. I have been enjoying listening to that CD as well as the one we purchased earlier in the week. Sweet Emma was quite a pianist, and I gather she must have been a force to reckon with during a time of disadvantage to both blacks and women.

For dinner, we went to a French restaurant called Meauxbar.

We ordered roasted bone marrow as an appetizer, which was outstandingly delicious.

And here is a look at the French Onion Grilled Cheese and a bowl of Yak-a-mein — a beef ramen of sorts that is unique to New Orleans.

Before taking the bus back to our Airbnb, we walked a few blocks in order to find a Geocache. The Geocache we chose led us to this spot, where street art by the famous UK-based graffiti artist known as “Banksy” can be found. This piece of art was created upon the three-year anniversary of Hurricane Katrina. The piece depicts a girl holding an umbrella over her head that instead of protecting her, causes drips that fall upon her. The art is a metaphor for the failure of the levees during Hurricane Katrina, which were intended to protect the city from flooding but instead caused it. The painting is estimated to have a value of $200,000 to $1.1 million.

The following morning, Day 6 of our trip, Paul unfortunately woke up experiencing the results of possible food poisoning. This, of course, caused a change in our plans for the day and concern about our ability to make our 5:45pm flight home. The airline agent informed me over the phone that if we were to change our flight to the following day, we would likely owe the difference between the ticket prices…totaling over $500. Yikes!

We decided to wait it out to see if Paul’s condition improved. Because we were required to check out of our Airbnb at 11am, we made a call to book a room with a hotel that would allow an early check-in time so Paul could spend the day in bed. We transported ourselves and our luggage via an Uber ride, and spent a quiet day in the hotel room. Fortunately, after a restful afternoon, Paul felt well enough…barely…for us to make our flight as originally planned. We landed in Detroit around 1am and were home in our own beds by 2am. What a day!

Despite the unexpected twist in our plans on our final day in New Orleans, we had a wonderful trip. We enjoyed every moment of our immersion into the history, food, music, and culture of this unique American city.

Thanks for reading our travel journal!