We started out the day with fresh café au lait and beignets from the famous Café Du Monde. 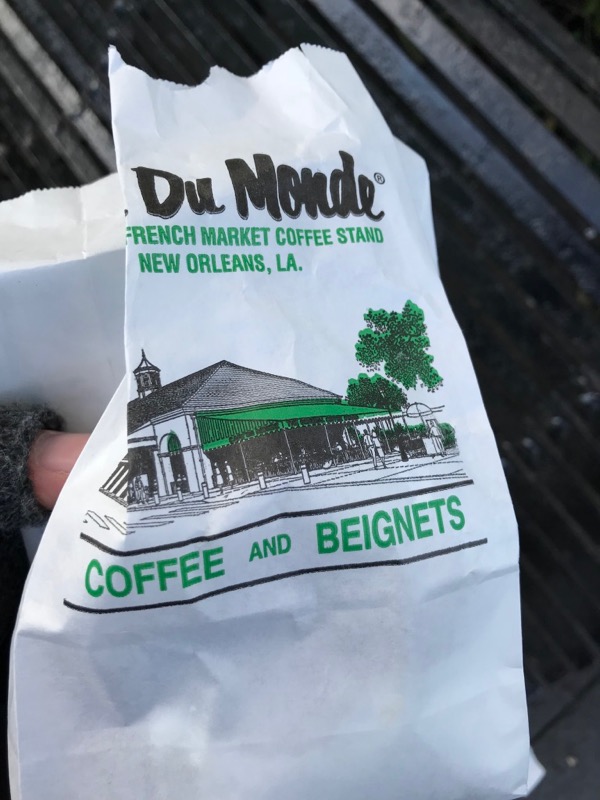 A beignet is a French donut, served warm and COVERED in powdered sugar. 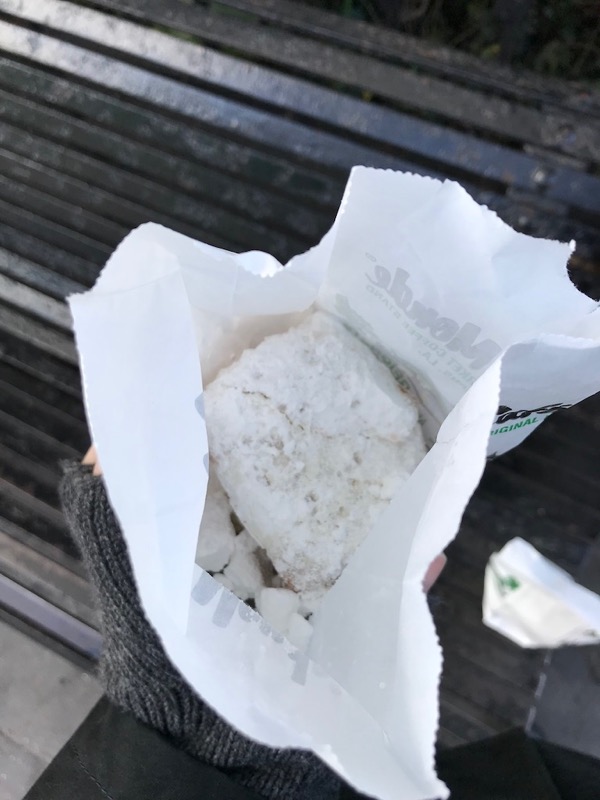 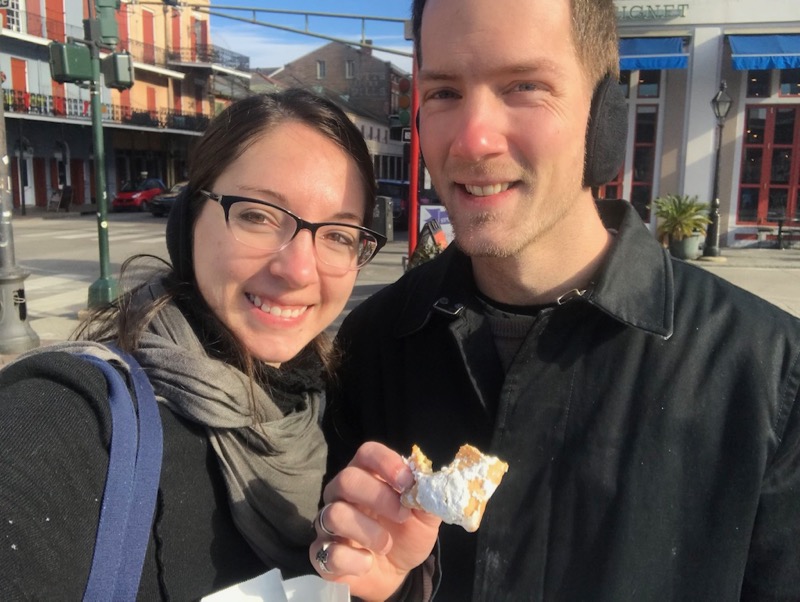 Our highlight of the day was a food tour, taking place at various restaurants along Magazine Street. The meeting place was a restaurant called Mahony’s. Here, we were told the story of the origination of the Po’ Boy sandwich. 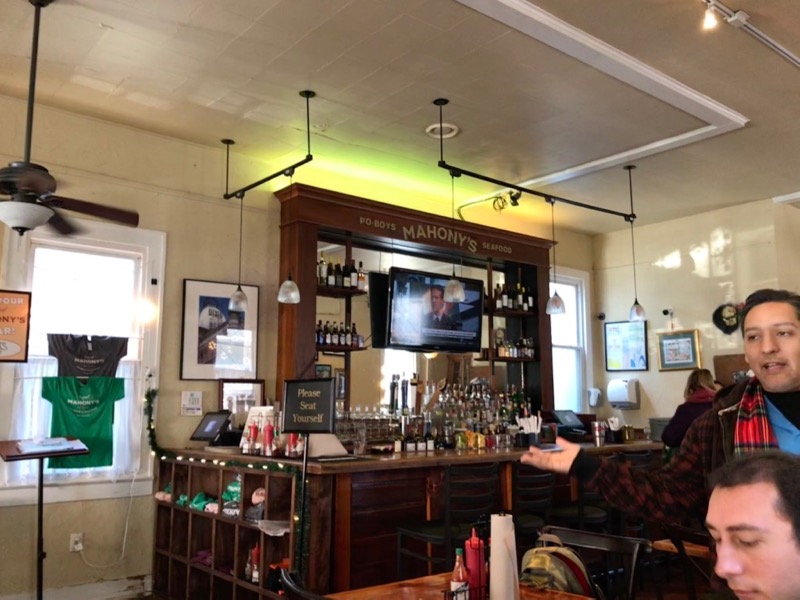 The story goes that two brothers who formerly worked as streetcar conductors opened a restaurant. When the streetcar conductors went on strike in 1929 and as a result were short on income, the brothers took pity on their former colleagues and offered them meals at no cost. When streetcar conductors would enter, the restaurant workers would shout, “Here comes another poor boy”, and the kitchen would make a sandwich with beef, potatoes, and gravy over the top — a cheap but filling meal. The sandwich caught on and its name became Po’ Boy. Although the restaurant where the Po’ Boy originated no longer exists, the sandwich remains popular in New Orleans and beyond.

Here is the Roast Beef Po’ Boy we were served, along with award-winning onion strings. It was delicious. 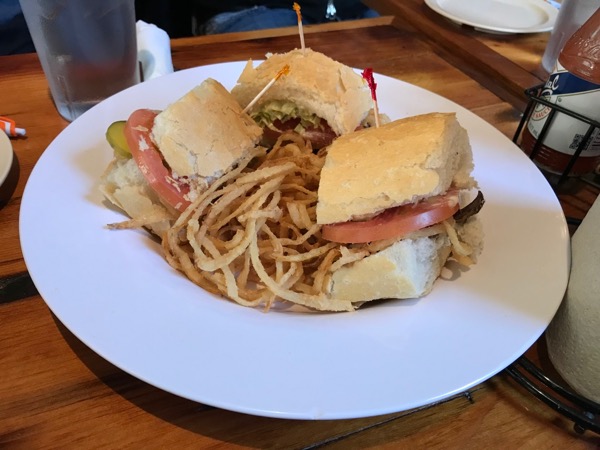 Our next stop on the food tour was called Dat Dog. Dat Dog is hot dog joint offering a variety of types of hot dogs. The one we sampled was alligator!

Over the top, they slathered crawfish étouffée — a Lousisiana stew consisting of roux (a thickener consisting of butter with flour, cooked to a brown color), onion, celery, and bell pepper (together known as the “trinity”), and either chicken or seafood. 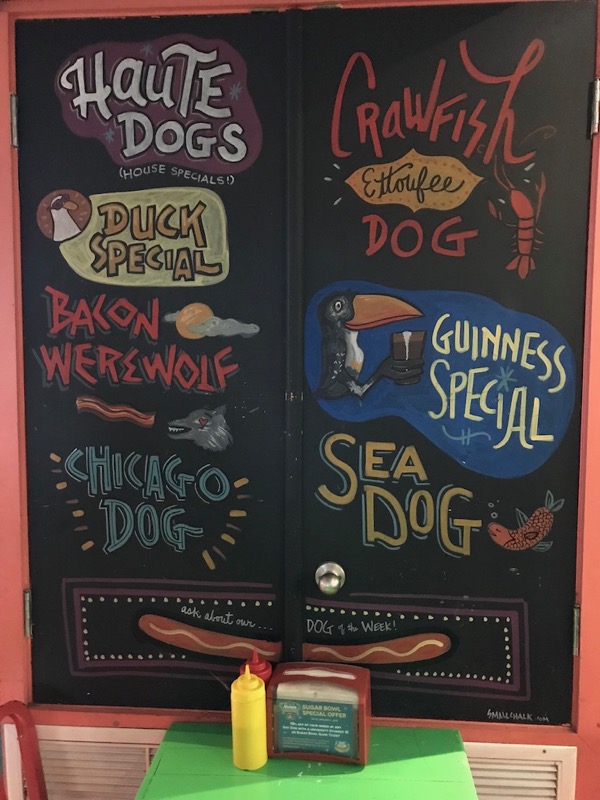 Next was a restaurant called Basin. 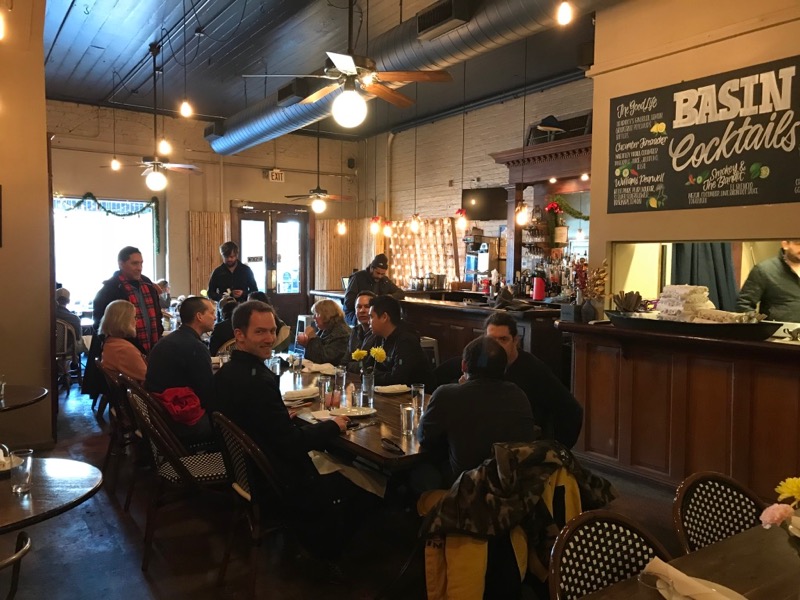 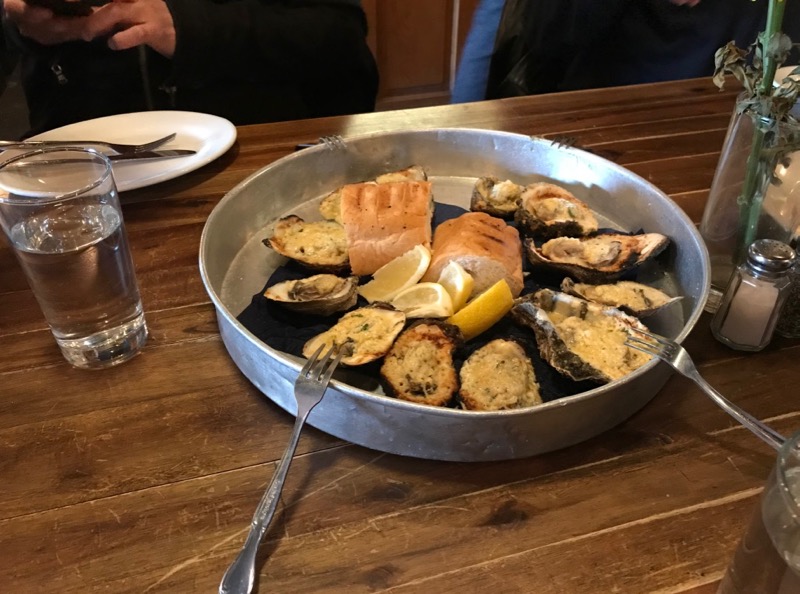 Next, we shared Eggplant Napoleon at Joey K’s. It consists of a tower of breaded-and fried eggplant, slathered in a butter sauce and served with fried shrimp on the side. This was very rich and delicious. Eggplant has never tasted so good. By now, our stomachs were feeling pretty satisfied. 🙂 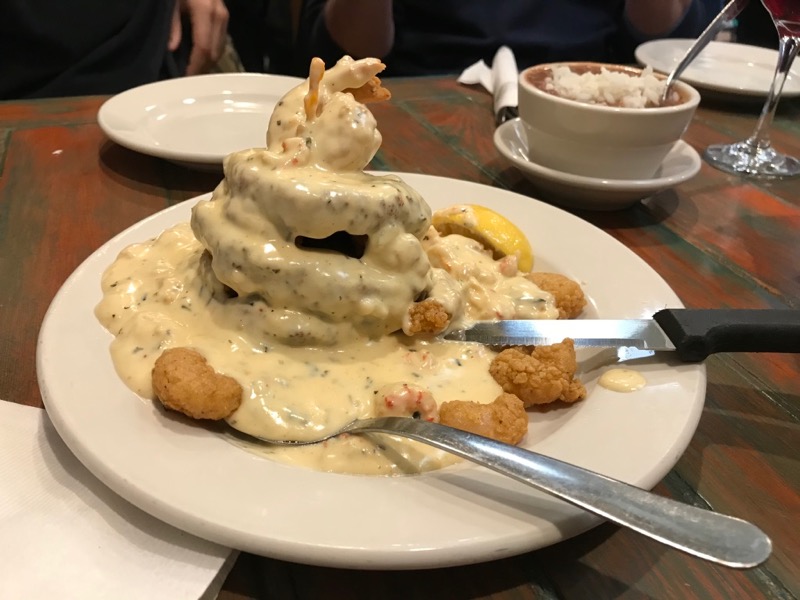 For dessert, our tour guide took us to Sucré. 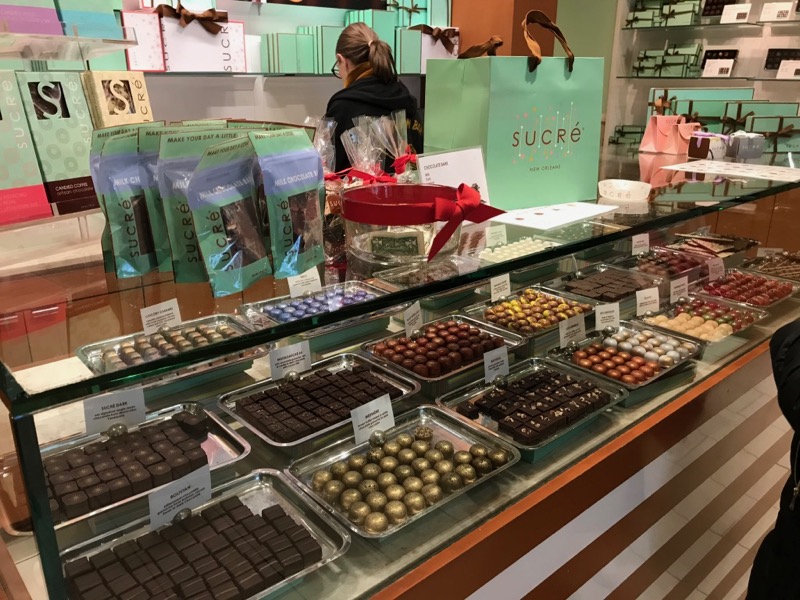 There were many tantalizing treats to choose from: chocolates, macarons, gelato, and more. We each settled on a fancy cupcake. Notice the fleur-de-lis! 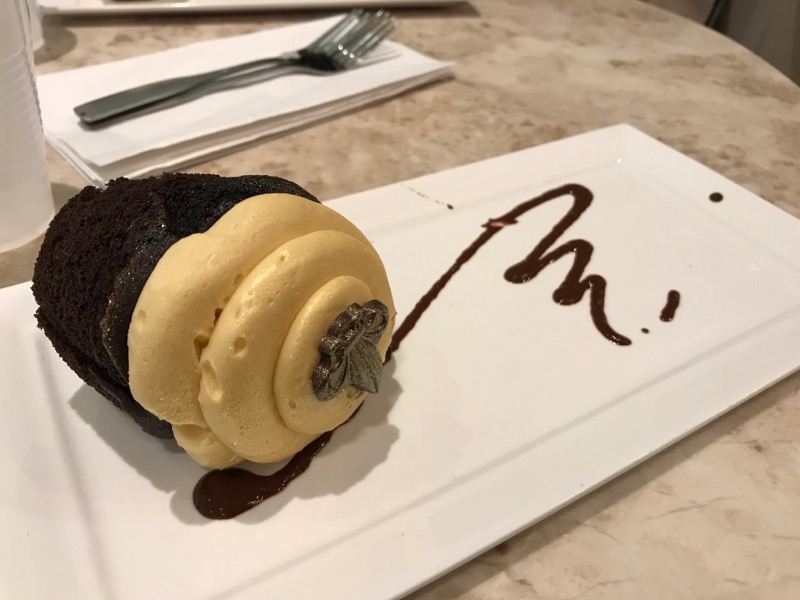 After the food tour was over, we stopped at a cute key shop to warm up. Check out the shop owner’s key collection! 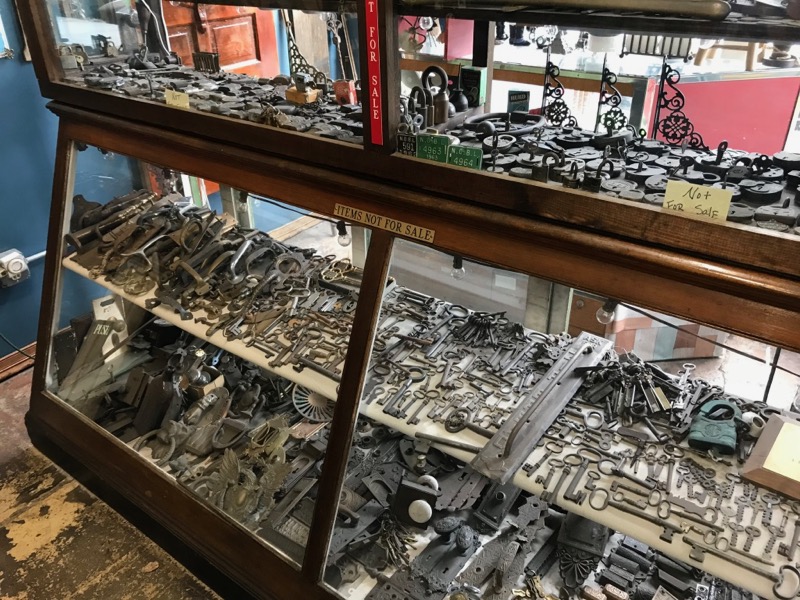 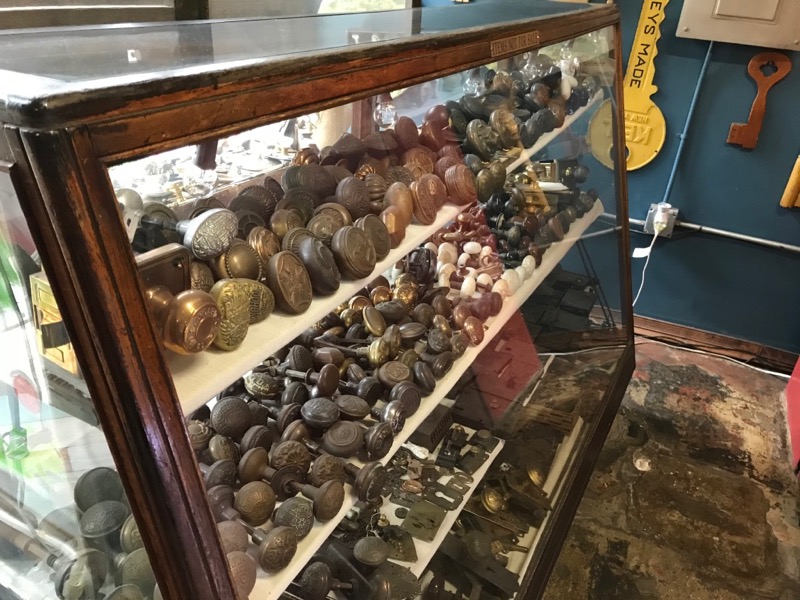 At this shop, I bought a half-dozen vintage keys for fifty cents apiece as a memento, and to add to a little dish I have on display at home.

Welcome to my photo blog! To subscribe to email updates (so you won’t have to keep returning to this site to see what’s new), click here, or, just enter your email address below.